Point of View in Fiction: Nature and Types

What is a Point of View?

To convey a story, an author purposively chooses the position, angle, or point from which the details (feelings, thoughts, motivations, and experiences, etc.) of the work are considered, observed, perceived, and described. As a literary device, such position is called the point of view which refers to the vantage point from which the events of a story seem to be observed and presented to the reader (Baldick, 2001) or "the outlook from which the events are related (Cuddon, 2013, p. 761). Since it is the angle through which details of the story are expressed, it determines how the reader understands, participates, and responds to the story.

Point of view is essentially a method of presentation. It is the particular voice (or narrator, speaker, teller, or persona) selected by the author through which he tells his story, defines a problem, or describes a state of mind. Thus, it is created by the author by selecting who tells the story and how the information is being filtered to the reader.

Most readers might respond that every author must always use his own voices because he is the one who writes the story, isn't he? Of course, the author is the one who writes the work. But he has some alternative viewpoints to tell the story. Therefore, it is not easy to determine just exactly what one's "own voice" is. Just suppose you are talking to your lecturer, to your friend, to a child, to a person you love, or to a distant relative. Your actual voice always sounds the same, no matter whom you are talking to. But the personality—or persona—that you employ changes according to the person you are speaking to. While talking to your lecturer, you behave politely. When talking to your friend, you act in an outgoing way. When talking to a younger person, you might behave a bit dominantly. All the personae are you, but which one is really you?

The same complexity exists in the creation of a literary work, as authors may deliberately choose to express themselves through voices that do not belong to them. In most stories, there is a complex blending of speakers, situation, intention, subject matter, and audience. Most authors select a voice representing a stage of personality that is properly given by the circumstances. It is certainly possible that the author uses his own perspective. However, he can also let a separate and independent character who is consciously imagined and consistently maintained by the author to tell the story and transmit the information to the reader.

Long fiction like novels can use an intermingling of viewpoints. A novel that is predominantly told in the omniscient narrative, for instance, can present a chapter that focuses entirely on one person using the first-person observer, and another chapter is told through the objective third person.  However, unlike novels which can be told through a combination of viewpoints, short stories employ a single point of view only. Due to the limited space they have, short story authors should maintain a consistent and uniform point of view.

A story uses the first-person point of view when one of the story's characters, not the author himself, tells the story. In this context, the character serves as a narrator so that the readers watch the story unfold through his eyes. This point of view could be identified easily because the character or narrator speaks to readers in his or her own voice, frequently using the pronoun 'I'.

While telling the story, the first-person narrator does not only convey the action of the work. At the same time, he also filters the action through his background, beliefs, attitudes, thinking, and even prejudices. This causes the story tends to seem natural and intimate.

A story uses the first-person narrator if the character who tells the story is involved in the events. He can be the major or a minor character. As a character, he can reveal only what he sees, hears, does, feels, and thinks. Since he can describe only the external aspects of others, he is unable to report or relate the inner feelings of any other characters (Figure 1a).

Boccaro's A Long walk Home employs the first-person narrator. The story is told by Jackson, one of the characters. He frequently uses the pronoun 'I' and 'my' to refer to himself. By using Jackson to tell his own experience, Boccaro manages to let the readers personally get involved with the events. This makes Jackson's bitter experience that makes him wiser feels natural and close to the reader.

Hemingway's Old Man at the Bridge is also told using the first-person narrator point of view. The story is narrated by one of the characters in the story, i.e. the war correspondent. Through the correspondents' viewpoint, Hemingway portrays how war victimizes the old man's life and his beloved pets whom he regards as his family in the short story.

Most fictions are written in the first and second point of view. However, the second-person narrator, though not very common, is also employed in some fictional works. In the second person point of view, the narrator relates the experiences of another character called “you.” Thus, the “you” become the protagonist who carries out the plot. In a text, the pronoun “you” is naturally used by the author to address the reader. Thus, the use of the second-person narrator automatically transforms the readers into either the protagonist or a character in the story. This cause the readers to directly involve or experience the events. In her Black Box, for instance, Egan employs the second-person narrative to lead the readers to participate in the story and allow them to sense the same feelings as the protagonist does.  Through the protagonist, a beautiful volunteer spy, employing the second person perspective, Egan  articulates  her concerns and worries about the security of the American security as well as the whole world in the post-”  9·11”   period and at the same time she embraces the virtues and pleasures of traditional storytelling delivered through a wholly new digital format (Nie 2015).

Another example of work employing the second-person narrator is Orozco’s Orientation, a short story that tells about someone who is attending their orientation for an office job. The story is told by the narrator who is conducting the orientation. The person on the receiving end is not specified, so that the readers feel as though they are the new employees to whom the narrator is talking to. This creates a deep sense of immersion, for it leads the readers to imagine themselves in the exact situation that is occurring in the story.

In the omniscient ('all-knowing') point of view, the narrator does not only describe the action and dialogue of the work but also seems to know everything that goes on in the minds of the characters. Thus, like God, the author moves from place to place, character to character, and episode to episode with complete freedom, giving himself access to his characters' thoughts and feelings each time he chooses and providing information at any time he wishes. This point of view, which is always used by authors who concern with psychological patterns and motivation has two variants: the omniscient narrator and a limited omniscient narrator.

If the narrator has god-like powers of seeing and knowing all, chooses to tell everything to the readers, and can bring them into the mind of all characters so that their inner-workings are quite clear, he is using the omniscient narrator point of view (Figure 2a). However, if the god-like narrator brings the reader only into the mind of a character, he is using the limited omniscient narrator's point of view (Figure 2b).

Chopin's The Story of an Hour is an example of stories employing the limited omniscient point of view. The story is told by a narrator who is not involved in the actual events. The narrator clearly describes Mrs. Mallard's feelings and thinking. Readers are brought into her mind. But the narrator never discloses other characters' inner workings. The narrator tells about other characters, like Josephine and the doctor based on their observable actions or behaviors.

O'Henry's The Gift of the Magi is also told through the limited omniscient point of view. The narrator who is outside of the story explains and describes what Della and Jim do to prepare a special Christmas gift for each other. Many times the narrator tells and explains many things about Della. He even brings the readers to Della's mind. However, he does not show what Jim is doing until right at the end of the story. Once he does appear, he remains unfamiliar to the readers. His reaction to Della's hair is not clearly described. It should be perceived through Della's mind.

In the objective third-person point of view, the narrator knows or reveals nothing about the characters' internal thoughts, feelings, and motivations but sticks to the external facts of the story (Figure 3). The narrator, who is outside of the story, reveals the character externally only. The reader is told what the characters look like and what they say but never what they think or how they feel. The narrator can also add some background information and bits of tangential wisdom. But as he does not get into a character's inner thoughts, no subjective matters (thought and feelings) exist. Consequently, the objective third-person narration is said to be limited. 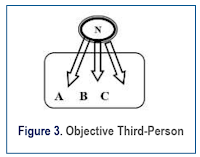 O' Henry's The Last Leaf is told in the objective third-person point of view. It is told by a person who is not involved in the story itself. The narrator uses pronouns such as he, she, and they instead of "I" (first person) or "you" (second person) to refer to the characters. He does provide some background information to the setting and characters, but everything is revealed externally only. He describes how pneumonia infests Greenwich Village and attacks Johnsy. However, the readers get to know the characters, including Johnsy, Sue, the doctor, and Behrman only through what they say and do and through other characters' statements. The author never brings the readers into any character's mind. For instance, he (the narrator) states that Behrman "believed that it was his special duty to do everything possible to help Sue and Johnsy." But he does not reveal how this belief is actualized until the end of the story when Behrman dies of pneumonia because he paints a leaf for Johnsy during a cold and wild night.