Robots are taking human jobs. How should we respond? 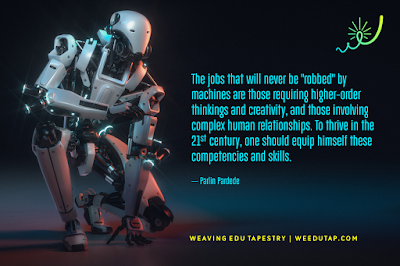 Humans have a natural predisposition to keep on creating better tools to be more productive or to have things done more effectively. By inventing new tools, people expect to have a more comfortable and prosperous life. The use of a variety of interconnected smart technologies, such as artificial intelligence (AI), autonomous machines, and the internet of things (IoT) to automatic machines (robots) has made human life much easier. Various jobs, ranging from the easy to the heavy ones, and the safe to risky ones, are now carried out by robots. As an example, Rifkin (n.d.) described how the mechanical, biological, and chemical technologies have replaced millions of farmworkers over the past 100 years. Before the first industrial revolution, all farming works were carried out by humans (aided by animals). With the help of new tools, in 1850 only 60% of the working population was engaged directly in farming. Now, not more than 2.7% of the workforce is employed in agriculture.

As a result of humans’ tendency to devise new tools, we are now living in the 4th industrial revolution (4IR), in which various technologies like artificial intelligence (AI), autonomous vehicles, and the internet of things (IoT) are merging with humans' physical lives. The fusion of these smart technologies enables machines to autonomously interact, access and evaluate data, and make decisions. A simple example of this is the smartphone we use every day. The blend of smart technologies in it enables us not only to call or text other people but also to provide us the weather forecast or suggest to us the best route to a place we have never visited. All these are possible because the connected smart technologies in the phone can collect data, analyze them, and draws the most accurate conclusion to suggest to us the best route to our destination. In industries, the integrated smart machines autonomously execute the production activities.

One of the major consequences of the transformation brought by 4IR is the fact that robots and other smart machines are now taking over human jobs. McKinsey & Company (2017) predicted that up to 800 million jobs would be lost to automation by 2030. Frey (2012) even projected 2 billion jobs (roughly 50% of all the jobs in the world) will be taken up by robots.

How should we respond to these predictions? Worried? What future do you have in mind? Gloomy? No! Let’s take these predictions as a wakeup call which reminds us that things change very quickly. Thus we should make ourselves ready to adapt.

We can start our preparation by realizing that not all types of jobs will be taken over by robots. Ford (2010) described that the riskiest jobs to be automated include the ones that are “on some level routine, repetitive and predictable”, while the occupations involving genuine creativity, professions that involve complex relationships between humans, or jobs that are highly unpredictable (like cave diver, crocodile psychologist, skydiving instructor, professional stuntmen, storm chaser) will be safe from automation. Why don’t we prepare ourselves or our children to grab one of the jobs robots will not take over?

The next thing we should realize is that besides “robbing” some of the present jobs, robots will also create a variety of new jobs, especially those related to design and innovation in the field of online automation and technology. World Economic Forum (2016) suggested nearly two-thirds of kindergarten students today will pursue jobs that today do not exist yet. World Economic Forum (2018) added that by 2022 automation will replace 75 million jobs but will create 135 million new jobs. According to Allen (2015), the results of the study census since 1871 in England and Wales revealed that the rise of machines has essentially created more jobs than taken them.

However, to be able to pursue the works that robots will not "capture" or the future works that do not yet exist today, individuals should master the required skills, including (1) complex problem solving, (2) critical thinking, (3) creativity, (4) people management, (5) coordinating with others, (6) emotional intelligence, (7) judgment and decision making, (8) service orientation, (9) negotiation, and (10) cognitive flexibility (World Economic Forum, 2016). The following section briefly describes each of these skills and suggests ways for honing them.

Complex problem-solving refers to one’s capacity to solve new problems (i.e. the ones a person has never encountered and thus has not been clearly described) in the complex real-world quickly. Such problems are likely to arise due to the sudden flow of change. Complex problem-solving skill is not inherited from birth. One can master it by continuously honing through exercises involving critical and creative thinking. Several studies (Slota 2013; Akcanglu and Koehler, 2014; Shute & Emihovich, 2018) showed that this skill can be improved by playing various video games.

Critical thinking is the ability to use logic and reasoning for: (1) identifying the central issues and assumptions in arguments; (2) recognizing the important relationships; (3) drawing the correct conclusions based on data; and (4) evaluating existing evidence or authority. Research results showed that reading fiction, writing (essays, fiction, and scientific work) and role-playing can effectively develop critical thinking skills.

Creativity is a product, process, or interaction that produces new ideas, thoughts, and objects using creative thinking. Creative thinking itself is the skill to produce new original, intelligible and useful ideas by (1) associating and combining some old ideas to be one or more new ideas; (2) reducing the elements of old ideas to create new and more effective ideas; (3) exploring all possibilities inherent in current concepts using existing rules; and (4) significantly changing one or more rules of existing concepts. Research results recommend art appreciation and art-works creation to develop creativity.

People management refers to one’s ability to motivate team members to maximize their productivity and respond to their needs. With this competence, a person is able to delegate tasks and empower others. Sarkar (2015) suggested five ways to develop one’s people management skills: concentrating on one’s EQ, involving everyone, focusing on communication skills, practicing empathy, and recognizing contributions.

Coordinating with others involves strong communication skills, awareness of the strengths and weaknesses of others, and being able to work together with different personalities. To develop these skills, doing role-playing activities and learning and completing group projects are highly recommended.

Emotional Intelligence is the ability to monitor your own emotions and those of others, to distinguish different emotions correctly, and use that information to guide your thoughts and behavior and influence the emotions of others (Goleman, 1995). This skill is very important for managers and leaders. Stahl (2018) suggested the following five ways to develop emotional intelligence: (1) Manage your negative emotions; (2) Be mindful of your vocabulary; (3) Practice empathy; (4) Know your stressors; and (5) Bounce back from adversity.

Judgment and decision-making skills include the ability to identify choices, assess risks, analyze information, and make choices. To develop judgment skills, Busine (2015) suggested five methods to do in simulations or real situations. The first is the case method, a learning strategy aimed to accelerate experience through disclosure to various perspectives on actual occupational cases. Second, leadership simulations, an effective method for helping participants understand the impact of their decisions and get personal insight through self-assessment, journaling, and peer feedback tools by immersing them in the business situations frequently faced by senior leaders. Third, acquiring knowledge relevant to the corporation, business, and discipline. Fourth, develop alertness of their own style and potential mistakes that can affect judgment and action. Finally, study and apply the conventional and contemporary decision-making models, and make sure when each of them is best to implement. Based on some studies, Frick (2018) offered three rules to follow for making a better decision: (1) Be less certain; (2) Ask “How often does that typically happen?”; and (3) Think probabilistically — and learn some basic probability.

Service orientation skills refer to the positive attitudes and behaviors that show awareness and willingness to respond and meet customer needs, requirements, and expectations. These skills are very important because in every business the customers are a core component. They must always be made the main priority. Happy customers can help companies build credibility and generate more business. Research (2016) shows that 77% of customers tend to recommend companies to friends if they have positive experiences.

Negotiation skills refer to the ability to reach agreement on various differences through compromising and avoiding arguments or disputes. Edwards (2016) suggested five exercises one can regularly repeat to enhance his negotiation skills: (1) Practice saying no; (2) Learn body language cues; (3) Listen to other people; (4) Conduct better research; and (5) Negotiate everything.

Cognitive flexibility refers to the brain's ability to switch from thinking of one thing to another, especially when a new and unexpected condition related to a job arises. Various studies recommend the activity of playing "brainy games", reading, learning, and completing group projects to develop mental flexibility skills.

In addition to these skills development, Basu (2017) suggested every individual adds new skills to be required in the future. Increasing one’s online visibility, personal brand enhancement, network development, startup adaptability augmentation, and health keeping are also important. In relation to these, the ability to use information and communication technology is a must.

To conclude, it is obvious that to create a more comfortable and affluent life, humans keep on inventing tools that can help, even replace, them to complete various jobs. Hence, technological disruption cannot be postponed or avoided. To respond well, we should prepare ourselves to adapt to all the inevitable changes The preparation could be started by realizing that the works that have been taken over by robots are the wearisome ones, which are included in routine, repetitive, and predictable works. The jobs that necessitate higher-order thinkings and creativity, and the professions involving the complex human relationships will be untouchable for the machine. In addition, we should also realize that besides taking over various jobs, automation also creates many new jobs. The question is: Are we ready to develop the competencies and skills needed by the jobs that will never be "robbed" by machines or the new jobs that will be created?