There's no equality without educational equity: A lesson from “Animal Farm” 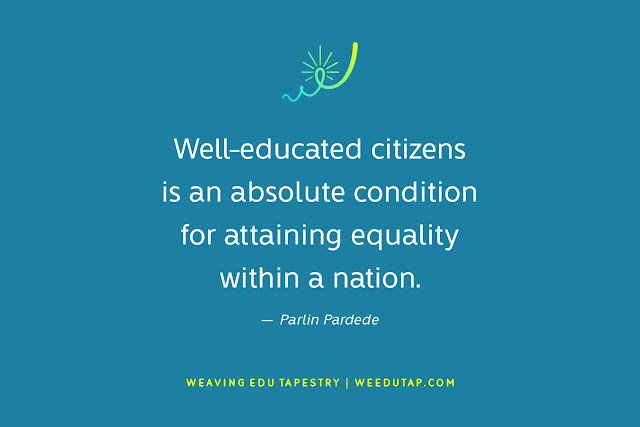 Sonia Sotomayor, the first Hispanic and the third woman to serve on the US Supreme Court, once accentuated the importance of educational equity for attaining equality within a nation by saying “Until we get equality in education, we won't have an equal society.” This statement indicates that to attain equality in a nation, providing the citizens with ‘potluck’ education is not enough. The education should be equitable, which, according to OECD (2008), covers fairness (everyone, regardless of the personal and social condition, can afford it) and inclusion (everyone should be allowed to achieve a comprehensive standard). Educational inequity will only create class stratification, and, thus, will alienate equality.

This idea is exposed by George Orwell in one of his best novels, Animal Farm (1945). What is more, he further explores that the educated elite can use educational inequity as a powerful weapon to secure the masses' compliance. In the novel, being kept to have inferior education, the other animals are unable to contest against the pigs’ manipulations. Thus, their inferior makes them unable to avoid the pigs’ exploitation over them.

Animal Farm is a fable telling about a group of animals that kick out human beings and take control of the farm they live on and an allegory of the 1917 Russian Revolution events which explores the corrupting nature of power. It starts with the animals' secret meeting held one night in the barn in which Old  Major, the oldest pig on the farm, persuasively tells the other animals how they live in poverty and misery because human beings enslave them. Thus, to live prosperously, they should revolt against humans and run the farm by themselves. Before  closing  his  speech,  Old  Major  teaches  them  a  song  titled “Animals of England.” Not long after that, Old Major dies, but the pigs have elaborated his vision into Animalism. Two most brilliant pigs, Napoleon and Snowball, led the animals’ underground movement to expound Animalism principles to all animals. The pigs also exclusively teach themselves reading and writing and reduce Animalism into “The Seven Commandments” (which is later endorsed as the farm constitution).

One night, being very hungry because Mr. Jones' men forget to feed them, the animals get angry and attack and kick out Mr. Jones and his men from the farm. Getting their freedom, the animals enjoy a happy life for a while. They are optimistic about a happier future by having less work, more food, and better education. However, a rivalry for power between Napoleon and Snowball emerges. Napoleon manages to expel Snowball away by having his dogs chase him. Seizing power on his hand, Napoleon exploits other animals just as Mr. Jones had done for the pigs’ advantage over time. Anytime some animals start to question Napoleon’s decision, the pigs can argue and force them to stop questioning. The novel ends with the visit of the neighboring farmers. In the welcoming party held in the former Mr. Jones’ house, the pigs behave like the humans so that the other animals cannot differentiate the pigs from the humans they tried to get rid of.

In Animal Farm, the pigs have been aware of the importance of education very early. After Old Major’s death, besides elaborating and expounding Animalism to other animals, the pigs also make education their privilege. Soon after Mr. Jones is expelled, the pigs “revealed that during the past three months they had taught themselves to read and write” (p. 19). When the farm has been established, they keep on developing their knowledge, as Orwell writes, “…, in the evenings, they studied blacksmithing, carpentering, and other necessary arts from books which they had brought out of the farmhouse” (p. 25). His good education also enables Snowball to be inventive. He manages to complete the windmill plan after studying “three books which had belonged to Mr. Jones —‘One Thousand Useful Things to Do About the House’, ‘Every Man His Own Bricklayer’, and ‘Electricity for Beginners’ (p. 39). Education has essentially made the pigs so clever that “they could think of a way round every difficulty” and they “did not actually work, but directed and supervised the others” (p. 22). In short, their superior education enables them to naturally seal their leadership on the farm.

It seems that the pigs have intently planned to use the power of education as an exclusive advantage of their group. That is why they limit other animals’ opportunities to gain an education by excluding them in the early program of learning to read and write and destroy the learning source before the other animals use it to learn (p. 19). Only after the farm has established, led by Snowball, the other animals get an education. However, that "education for all" seems not very seriously conducted and the results are of low quality. Some animals can read well but are not interested to read. Others can learn the whole alphabet but cannot put words together. Some others could not get beyond the letter D. Most animals cannot even learn the Seven Commandments by heart so that Napoleon must simplify it into a single maxim, i.e., “Four legs good, two legs bad (pp. 26-27). In short, although the pigs (as the ruling group) provide education to other animals, its intensity and process quality are very limited. Therefore, the results are not satisfactory, and this keeps the pigs' intelligence far more superior so that they can cement their status as the educated elite.

With their superior intelligence, the pigs can then manipulate the other animals anytime they need to do so. This is very clearly shown by the scene when the animals suspect that living conditions are deteriorating. But Squealer can eliminate their doubts just by providing fabricated statistics revealing “that the production of every class of foodstuff had increased by two hundred percent, three hundred percent, or five hundred percent, as the case might be” (p. 69). Their inability to recollect or to access the past living factual data ends by accepting that Squealer's data is correct. Orwell writes "The animals saw no reason to disbelieve him, especially as they could no longer remember clearly what conditions had been like before the Rebellion” (pp. 69-70). To take another example, when the pigs begin to sleep in the bed, Clover thinks that it violates one of the seven commandments, i.e., "No animal shall sleep in a bed" (p. 15). However, when Squealer tells her that the commandment runs as "No animal shall sleep in a bed with sheets", Clover's weak memory makes her unable to question further. Orwell writes, "She had not remembered that the Fourth Commandment mentioned sheets; but as it was there on the wall, it must have done so" (p. 45).

To maintain his autocratic power, on purpose, Napoleon provides the new generation with limited education plus indoctrination. The results of such education are shown through the three new horses' features, i.e., they are “fine upstanding beasts, willing workers and good comrades, but very stupid. None of them proved able to learn the alphabet beyond the letter B. They accepted everything that they were told about the Rebellion and the principles of Animalism” (pp. 95-96).

To conclude, through this novel, Orwell reveals that the pigs manage to create inequality in the farm for their advantages by providing inferior education to other animals. The pigs keep the other animals less educated so that they can exploit them. Therefore, well-educated citizens, as Orwell indicates, is an absolute condition for attaining equality within a nation.