Reader-response is a kind of essay used to express and defend a thoughtful reaction to what (poem, short story, novel essay, or other forms of text) someone has read. As a reaction to a text, in which a reader examines, explains, and defends his personal reaction to a text, reader response is also called a “reaction paper”. A reader-response is therefore more than just a summary. It explores why a reader likes or dislikes the reading, explains whether she/he agrees or disagrees with the author, identifies the reading's purpose, and criticizes the text.

Reader-response is based on the theory which emphasizes the reader's significant role in the reading process and in the creation of meaning. Reader-response diverts the emphasis away from the text as the sole determiner of meaning to the significance of the reader in analyzing and studying the meaning or the interpretation of texts (Bressler, 1999). While reading, a reader creates her or his own meaning through a “transaction” with the text based on personal associations. The reader is not a passive receiver of information or meaning. He or she actively participates in the creation of a text's meaning.

Since a reader response accentuates on the importance of the reader’s role in interpreting texts and all readers bring their own emotions, concerns, life experiences, and knowledge to their reading, no reader response essay will emerge identical with another. Fifty students assigned to respond to a single text will produce fifty subjective and unique reader response essays. Although these essays are varied in ideas, as far as they are written in the correct format, all of them could be accepted as adequate interpretation.

The length of a reader response essay is quite relative. It could be some hundreds to some thousands of words in length, depending on the complexity of the text responded and the depth of the expected response. Despite that, it generally consists of three basic components, but each section can consist of more than one paragraph.

Section one is used as an introductory part in which necessary information about the text and its author is identified. This section generally starts with a brief summary of the text, which covers the title, author’s name, and his/her main point—i.e. theme, main message, or central idea of the work. The summary should therefore not retell everything that happened in the work. It should express what the reader thinks the author is trying to get across.

Section two is the core of a reader response essay for it shows its writer’s reading thinking. This section comprises a good part of the reader’s response.  The reader may need to return to the work s/he read and notes the points s/he marked as significant.  She/he should pick one that s/he is “connected” with (based on experiences, interests, or knowledge) and write a response to it/them.  S/he can copy part of the passage into her/his essay (using quotes when needed) or just paraphrase the idea s/he thought was the most engaging.  S/he should respond to the idea of the passage but does not simply summarize the reading.  S/he should think about how the passage s/he chose relates to the author’s main point (from section one). It is best to try to stick to one specific point instead of trying to include everything the author addresses. That point, however, should be completely developed.

Section three reflects the writer’s goal as a reader. This is the place where s/he reacts to the point(s) analyzed in section two. S/he does this by answering some of the following questions. Is it a point I agree with?  Did it remind me of something else I have read or heard?  Does it remind me of any current issues or problems?  Does it encourage me to read other works by the same author, or not? Why or why not? To whom would you recommend this text?

To see how these concepts work in a reader response essay, look at the example provided below. It is written as a reading response to Jason Bocarro’s short story entitled A Long Walk Home. Before you study the example, you are suggested to read the short story first. It can be accessed here. 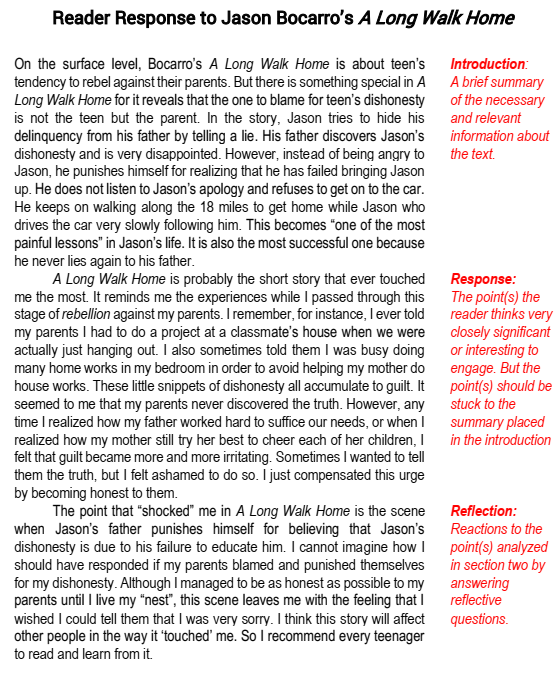 Interesting short stories to read and respond to (click the title to get to the story):