What is a short story?

This article aims to introduce the nature of the short story by taking and discussing some of the related ideas available in the literature. To make the discussion clearer, these conceptions are applied to Bocaro’s A Long Walk Home (1977), a short story about the major character’s recall of a lesson he learned when he was a teenager. Since the short story is employed as an example of some concepts, it is suggested to read it before continuing to read this article.

Short story is a type of fiction. Fiction is a kind of prose, and prose is one of the main genres of literature (See Figure 1). Therefore, to define short story we need first understand what literature, prose, and fiction mean. Literature is hard to define in a single definition because the body of literature is very wide as it has many forms. Its definitions also tend to change over time because literature never stops developing. Derived from the Latin word Latin litaritura/litteratura which means “writing formed with letters”, literature is defined as is any written work or works in print, although some other definitions also include the spoken or sung texts. Marcus and Sollors (2009) stated, “literary means not only what is written but what is voiced, what is expressed, what is invented, in whatever form”. Therefore, in general, literature covers written works and spoken texts. 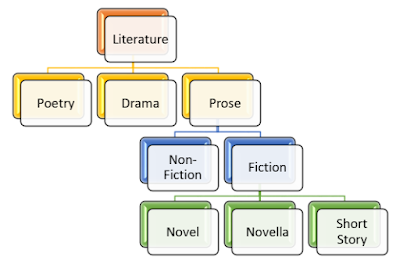 However, recent definitions tend to delimit literature into “imaginative” writing, or fictive works, i.e. writing which is not literally true created to understand, express, and share experiences as seen through the author’s view. In this sense, literature excludes any factual, true, and historical works. Wellek and Warren (1963, p.22) that it is best literature to limit literature imaginative works. A literary work is produced by the author’s imagination. It is neither only a record of facts nor just the gathering of real events though it may happen in the real life. They accentuated. “Literature can create its own world as a product of unlimited imagination.” In the same way, Pickering and Hopper (1981) defined literature as “the creation of a uniquely human activity, born of man's timeless desire, to understand, express, and finally share experiences”.

In terms of academic courses, the term literature is particularly limited to the major genres of poetry, drama, and prose. This limitation implies that literature covers only literary works having the quality ducile et dolce, useful and beautiful. Davids (1983) insisted that literature is a creative writing of artistic value and Hancock (2006) stated that literature is written works of fiction and non-fiction which highly prioritize compositional excellence and advancement in the art of writing than the profit or commercial appeal. Literature, therefore, refers to any written work created with beautiful or the elevated use of language and is intended to understand, express, and share experiences as seen through the author’s view in order to present emotional effects and moral sentiments.

As it is stated earlier, a short story is a type of prose, a form of language without formal metrical structure. Thus, prose employs “a natural flow of speech, and ordinary grammatical structure rather than rhythmic structure, such as in the case of traditional poetry” (Literary Devices, n.d.). Prose is also different from drama which is written out as a script to be clearly spelled out for the audience in a theater, radion, or television.  Prose is divided into fiction and non-fiction. Fiction, derived from Latin fictio which means “the act of making, fashioning, or molding,” refers to any literary work that is based on the author’s imagination. It is not presented as fact, although it could be based on a true story or situation. Fiction, which is defined by Alternbend and Lewis (1966, p. 29) as "a prose narrative that dramatizes changes in human relationships", covers novels, novellas, and short stories. On the other hand, non-fiction is any literary work mainly created on fact, although it may include certain fictional elements. Non-fiction includes biography and essay. As a type of fiction, the short story is an imaginary or invented story. It is not true and factual, although it may be written based on a true story or situation.

As an imaginative work, short stories cover a diverse area of subject matter. Some short stories are about a romantic relationship between a man and a woman. Some are about animals and plants (like those in fables). Some others talk about aliens, robots, or other forms of artificial intelligence (science fiction), ghosts, or other supernatural beings (ghost stories), the dark side of human nature (horror stories), and mythical or legendary beings (folk tales and fairy tales). Whatever the subject matter of a short story is, it always reveals something about human life. An author may tell about animals, angels, robots, or aliens. They are, however, purposively selected and shaped by him to achieve his purpose, i.e. to dramatize one or more aspects of human life.

Despite being imaginary, fiction is usually a plausible and narrative which dramatizes changes in human relationships. Although A Long Walk Home is a recall of a lesson he takes from the past, it is an imaginary or fictional work. It may be based on a true event, but the author must have made some additions, reductions, or modifications to it. It is a narrative work that dramatizes a change in Jackson and his father's relationship. Before and after the event, they are the same father and son. However, after the event something has changed, i.e. Jackson never again tells a lie to his father after.

What makes a short story different from a novelette and a novel is its brevity. In relation to this, Hansen (2019) describes a short story as a “brief fictional prose narrative that is shorter than a novel and that usually deals with only a few characters.” A short story is generally 500 to 7,500 words in length (A Long Walk Home is written in 556 words!). A novelette is 7,500 to 17,000 words in length and a novel is more than 17,000 words (See Figure 2). 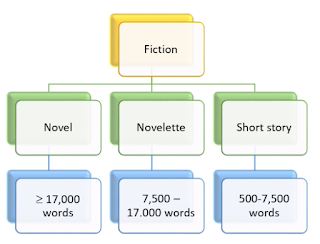 As a consequence of its brevity, a short story usually has a limited number of characters and focuses only on a single event. Baldick (2008), stated that a short story is “A fictional prose tale of no specified length, but too short to be published as a volume on its own, … which normally concentrate on a single event with only one or two characters, more economically than  a novel’s sustained exploration of social background.” The brevity of a short story is also emphasized by Poe by stating that a short story is “A narrative that can be read at one sitting of from one-half hour to two hours, and that is limited to ‘a certain unique or single effect.” These criteria are pertained to A Long Walk Home, whose characters are only two—Jackson and his father—and focuses only on a single event, i.e. when Jackson is asked to service the car. Even the event does not include various details. The author, for instance, does not tell what parts of the car are repaired, how much it costs, and what's the name of the mechanic. Bocarro just focuses on using the event as a means to show how Jackson decides to make up a reason for his being late and how his lie disappoints his father. By so doing, Bocarro manages to present a single effect, i.e. Jackson's decision to never again tells a lie to his father.

To conclude, a short story is a brief fiction (written in 500 to 7,000 words) that focuses on a single event taking place in a limited setting and involving a limited number of characters, through which changes in human relationships are dramatized. ***