The concepts available in the literature about the nature of writing seem to be polarized into two opposing poles. One the one hand, writing is viewed as the process of communicating messages (thoughts, emotions, or feelings) in a readable form using written language symbols (letters, punctuation, and spaces). In short, he first thinks and then writes. On the other hand, writing is viewed as a thinking process. In this paradigm, writing is seen as a process for clarifying, not simply communicating thinking. These two opposing views have made the question of whether we think first and write or write first and then think as difficult as to answer the old ‘chicken and egg’ issue. This article aims to determine which of these views is closest to the nature of writing by examining what happens in a real writing process.


The proponents of the view that writing is the process of communicating messages in readable texts commonly argue that whether a person writes using a pen/pencil (handwriting) or a keyboard (typing), he begins by thinking of ideas and then writes them down. Since the final text contains the writer’s thoughts, sharing it with the intended audience indicates that writing, like speaking, is interpersonal communication. In line with this view, Rivers (1968), a well-known language teaching methodologist, stated that writing refers to the expression of ideas in a systematic way to organize the graphic conventions of the language. The famous writer Richard Wright also supports this by saying that while writing, he was trying to build a bridge of words between him and that world outside. This metaphor indicates that writing is conveying or communicating messages to the reader (the world outside) through written words.


Those who view writing as a thinking process argue that while writing, one is essentially trying to discover his thoughts by conducting an intra-personal communication. White and Arndt (1991) stated: “Writing is far from being a simple matter of transcribing language into written symbols: it is a thinking process in its own right.” In line with this, Hunt (2010) stated that writing is not just expressing ideas that have previously been in mind, but also a magical and mysterious process that allows the author to construct (make) new or different ideas Thus, in writing, a person writes first and then thinks. Reflecting on his experiences as a writer, William Stafford accentuated, "I don't see writing as communication of something already discovered, as 'truths' already known. Rather, I see writing as a job of experiment. It's like any discovery job; you don't know what's going to happen until you try it."

To ensure which view is more accurate, checking what happens in a real writing process seems to be the most reasonable way. According to Time4writing.com (n.d.), the process of writing consists of five stages: prewriting, drafting, revising, editing, and publishing. Prewriting includes the activities of generating, selecting, sorting, and organizing ideas to write about. It also involves the consideration of purpose and target audience which will affect the genre selection and organization. Drafting comprises the recording of ideas intended to meaning-making, grammar, spelling, and punctuation. Revising is conducted to review, modify, reorganize the text by deleting, adding, or rearranging content and by suiting the tone, style, and content to the target audience. Peers and/or instructor’s feedback is often beneficial to help improve the writing. Editing is carried out to proofread and correct grammatical and mechanical errors. It also involves efforts to improve style and clarity. Publishing refers to the preparation for sharing the text with the target audience. 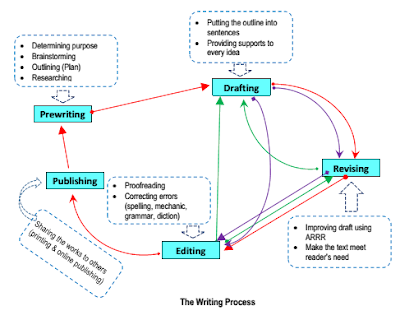 As shown by Figure 1, the writing process is not linear but recursive. It doubles back upon itself and leaps ahead. While drafting, for instance, it’s possible that a writer also directly corrects a grammatical error. Thus, he has proofread (a later stage). In Figure 1, the red arrows indicate a first forward move; the green arrows represent a backward move; and the purple arrows indicate a second forward move, i.e., you go to the revising stage again after returning a while to the drafting stage.

Now let’s see these stages in action. Suppose you are going to write about Lake Toba in an essay of about 600 words in length. To a higher extent, the first thing you do is to try to consider the most interesting subject related to Lake Toba that you can write well in about six to seven paragraphs. Then, you brainstorm to generate ideas, make an outline, and do research by reading relevant sources or interviewing people familiar with the subject. After that, you write the draft, revise it, edit it, and finally publish the final text.

Considering these activities, it is clear that thinking and writing take place concurrently during the writing process. While considering the topic, you are thinking. In brainstorming, you generate ideas by writing them so that they are visible, and their visibility enables you to observe and refine them. You also involve both while outlining and researching. In drafting, you express the points you have organized in the outline into sentences and paragraphs. Although these activities are predominated by the activity of putting down ideas into written symbols, your thinking is also involved to make sure the outline is systematic. In revising you improve your draft by adding, removing, rearranging, and replacing information. These activities also involve both writing and thinking. In editing, in which you proofread and correct any errors to make the essay clear and interesting to read, both writing and thinking are involved.


In conclusion, the writing process simultaneously involves thinking and writing. One cannot write without employing both of them. He needs to think to construct ideas and to write to put and organize them in written form. By having the ideas in written forms, they are visible and easy to refine (by thinking). The refined ideas are then communicated (by writing) in a readable written language so that the target audience can get what you mean. Think, write, think, and write are simultaneous activities you conduct in writing. Thus, writing is essentially both an interpersonal communication (in which one thinks to write) and an intrapersonal communication (in which one writes to think).