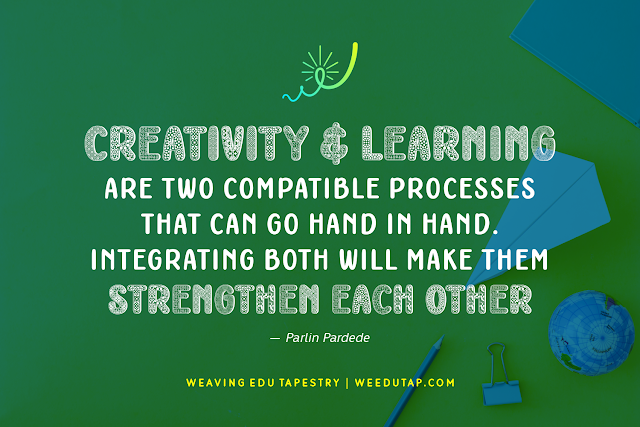 Creativity and learning are two compatible processes that can go hand in hand. Integrating both will make them strengthen each other.


Creativity is not a new concept, but the accelerant changes caused by the encroachment of technology on all life aspects have made it a prominent buzzword among business leaders and educators. More and more jobs have been being taken over by automated technology. To adapt to such a new technological environment, organizations should keep on making innovations. To innovate, having creative staff is a must. The result of a study on 35 million UK job adverts from 2013-2017 shows that the need for creativity is likely to grow in importance in the future workforce. It is confirmed by a study (2014) involving 1,000 U.S. hiring managers which revealed that 78% of the participants view creativity is required for economic growth; 85% believe it is valuable to society, and 94% agree it is key when evaluating candidates for a job.

Despite the growing need for creative talents, most current graduates are found unprepared fill in the need because the present educational system does not yet facilitate creativity development since the system is still dominated by the first Industrial Revolution paradigm, i.e. to train students to be good workers who follow instructions. Such a paradigm not only ignores but also kills creativity.

Can English as a Foreign Language Educators contribute to creativity development among the students? The answer is yes for four reasons: (1) all individuals are naturally creative, and (2) creativity is a manageable process and a skill that can be honed; (3) creativity process is compatible with the student-centered learning process; and (4) a foreign language classroom is a very suitable environment to develop creativity. All EFL teachers need to do is infusing creativity into the process and activities of learning employing the student-centered approach.

By definition, creativity is the process and the product of creating novel, effective, and ethical products, actions, or ideas (Cropley, 2011). These criteria (novel, effective, and ethical) designate three hierarchical levels of creativity, in which novelty is the lowest qualification and ethics is the highest. Thus, an idea that is novel, appropriate, generative and influential is more creative than an idea that is only novel and appropriate. Novelty indicates that creativity’s process and products should be something different from the existing ones. Effectiveness imposes that good and rewarding creativity should work and be useful--be it in the aesthetic, artistic, spiritual, or material sense. Ethics accentuates that creativity should not be destructive, selfish, criminal, and harmful.

Everybody is naturally creative, although some people’ creativity is different from others’ creativity in types and levels. Beghetto and Kaufman (2009) divides creativity into four levels: (1) “Big C” level which belongs to the eminent creative person (e.g., Mozart and Edison); “Pro C” level, possessed by experts in their fields (e.g., musicians and scientists); (3) “little-c” level, regarded as creative by peers (e.g., winning a writing contest); (and) “mini-c”, i.e., individuals creativity used in learning (e.g., learning insights), which is shown by most students.

Each of these creativity enables the owner to create ideas, thoughts, and objects that are different by through a creative process. Creativity should not always be regarded as creating something out of nothing, but as the act of uncovering, combining, rearranging, regrouping and synthesizing already existing elements is more appropriate. Thus, when a student is creating a unique expression using existing words, it is creativity.
The process of creativity and student-centered learning are essentially compatible. Based on the constructivist theory, learning is viewed as a process of generating understanding, knowledge, skills, and attitude through experience and reflection on the experience.  Thus, both learning and creativity are both a producing process. Similar to a creative thinker  who  generates  something  new,  a  student  who  learns  using  the  constructivist approach is also an active creator, not a passive recipient, of knowledge. As a  creator,  he  actively  asks,  explores,  and  assesses  what  he  knows  during the learning process.

The compatibility of the process of creativity and learning makes it possible to integrate both so that they go hand in hand. By so doing, they will strengthen each other. Therefore, infusing creative thinking into any learning process will essentially not bring an extra burden to both students and teachers. Rather, it will make learning more effective because creative thinking is also an important learning tool (In Bloom’s taxonomy, creation is placed at the highest level of thinking). Research findings (Adesope et al, 2010; Ghonsooly & Showqi, 2012; Vasudevan, 2013) revealed that learning a foreign language significantly enhances one’s creativity, and, conversely, the integration of creativity increases students’ language skills proficiency.

Why is a foreign language classroom a very suitable environment for honing creativity? Simply because every individual naturally has linguistic creativity which enables him to keep on creatively exploiting the foreign language system in phonological, morphological, or syntactic domains. If a student is facilitated with appropriate environment, he will be able to create an unlimited number of new, fresh and imaginative expressions and solutions by manipulating, combining, or recombining a finite number of existing items of phonemes, morphemes, lexemes, or phrasal units. During the process, the student could also identify new conceptual structures and generate unexpected associations between previously distinct concepts.